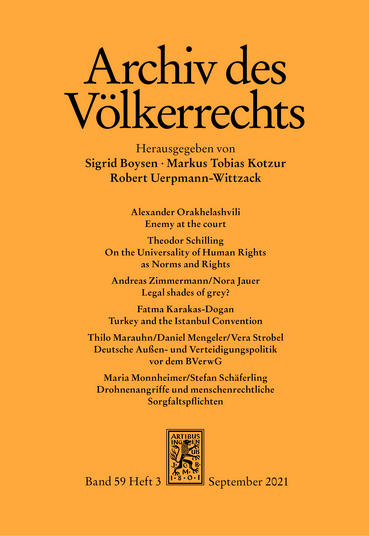 Artikel PDF
DOI: 10.1628/avr-2021-0018
On 25 November 2020, the German Federal Administrative Court ruled on an individual claim for protection against US drone strikes in Yemen, submitted by three Yemeni citizens against the Federal Republic of Germany. In its ruling, the Court accepts that, in principle, there may be an extraterritorial constitutional duty of protection imposed upon the Federal Republic of Germany arising from the right to life. According to the Court, such a duty may arise for the benefit of foreign citizens living abroad and in the case of violations of fundamental rights by foreign states. The Court develops several criteria for such a duty of protection to exist. However, it rejects a violation of such obligation in the case at hand. Thus, in contrast to a preceding lower instance court ruling, the claimants cannot demand any further measures to be taken by the Federal Government to ensure that Ramstein Air Base is used in accordance with public international law, in particular international humanitarian law. This contribution analyses the Court's reasoning and questions the requirements set out by the Court concerning an extraterritorial constitutional duty to protect the right to life. The focus is on constitutional law and public international law issues, including international humanitarian law. It is argued that the Court marginalizes the interface between fundamental rights and public international law rather than effectuating this interconnection.
Drucken
Teilen
Personen
Thilo Marauhn ist Professor für Öffentliches Recht, Völkerrecht und Europarecht an der Justus-Liebig-Universität Gießen.