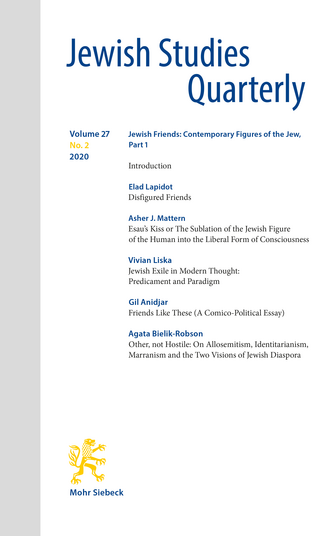 article PDF
DOI: 10.1628/jsq-2020-0009
This paper addresses a fundamental structural paradox in the modern figure of the Jew as a friend. The paradox results from the essence of Jewish modernity as the time of Jewish integration within (i. e., becoming friends with) non-Jewish modernity, or simply within the non-Jewish, paradigmatically through political emancipation and socio-cultural assimilation. The process of assimilation, in which Jews relinquish their distinctiveness, implies loss of the specific, distinct form of Jewish existence − namely, a loss of the figure of the Jew, a dis-figuration. Thus, paradoxically, the modern Jew becomes the figure of disfiguration. The paper articulates the significance of this paradox through analysis of a central contemporary phenomenon of philo-Judaism, namely the post-Holocaust opposition to anti-Semitism – »anti-anti-Semitism« – in political philosophy. It claims that anti-anti-Semitism rejects anti-Judaism by de-legitimizing any figure or general idea of the Jewish − that is, by rejecting Judaism.
Print
Share
Authors/Editors
Elad Lapidot No current data available.