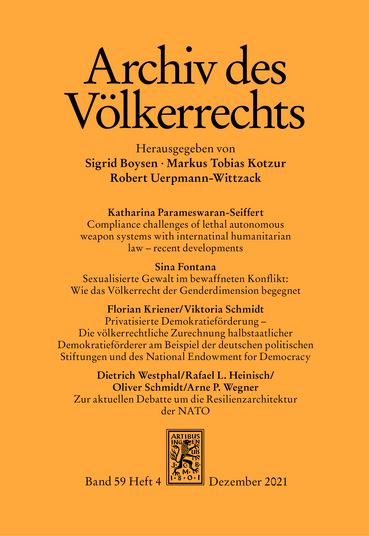 article PDF
DOI: 10.1628/avr-2021-0024
The article examines state responsibility for the acts of »privatized democracy promoters«. The National Endowment for Democracy (NED) and the German Political Foundations are used as examples for a wider model of privatizing controversial aspects of external democracy promotion. Their direct funding of non-state pro-democratic actors in the host state regularly sparks inter-state controversies. Based on an analysis of Articles 4, 5, and 8 of the Articles on the Responsibility of States for Internationally Wrongful Acts, the authors argue that the actions conducted by privatized democracy promoters are fully attributable to their corresponding state. Due to its historic predecessor, its full economic dependency and meticulous legal regulation, the NED can be qualified as a de-facto organ in terms of Art. 4 ASR. In turn, the historic conception, administrative regulation and strategic function of the German Political Foundations lead to the conclusion that the German state has endowed them with governmental authority in terms of Art. 5 ASR. Therefore, states should acknowledge that their efforts to promote democracy abroad are attributable to them. They should work towards a framework in which these activities can be conducted without sparking frequent inter-state controversies.
Print
Share
Authors/Editors
Florian Kriener No current data available.