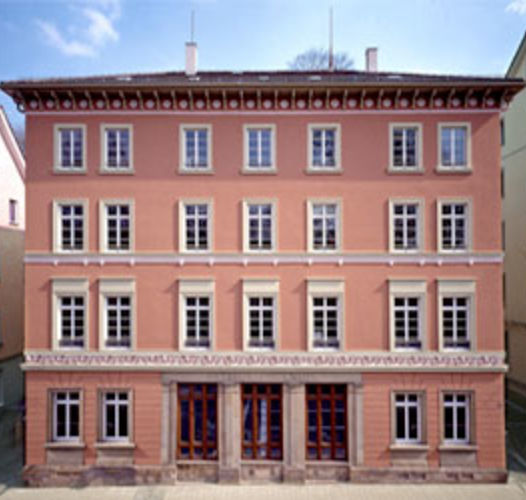 The neo-classical building in Tübingen's Wilhelmstraße dates from 1846 and has been home to the publishing house since 1899. 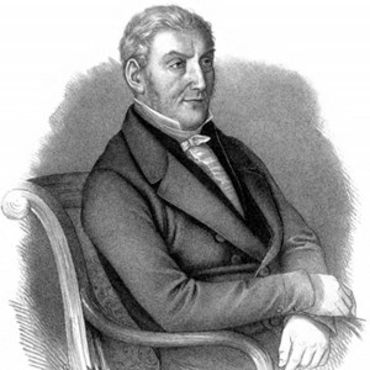 1801-1878: The Twofold Origin – university presses in Heidelberg and Tübingen

J.C.B. Mohr in Heidelberg
On the 1st of August 1801, August Hermann (1776-1803) founded an eponymous book-trading business in Frankfurt. Jacob Christian Benjamin Mohr (1778-1854), whose name was to be synonymous with the books until 1996, bought the Hermann'sche Buchhandlung in 1804 and under his name, operated the publishing, printing and book-selling enterprise.

In 1805, he was invited by the university in Heidelberg to set up an academic publishing house which he then ran successively with two partners, Johann Georg Zimmer (1776-1853) and Christian Friedrich Winter (1773-1858), managing it alone from 1822. Mohr closed down the Frankfurt branch in 1810/11.

Around 1818, one of the first academic journals – the Archiv für die civilistische Praxis (AcP) - was introduced to the publishing program. Published under the name Mohr & Zimmer were works of the Heidelberg Romantics, such as Des Knaben Wunderhorn, the cover picture of which – a horn of plenty or a small postilion, horn held jauntily aloft – appeared repeatedly right up into the 1970s as the company's emblem.

In 1842, J.C.B. Mohr's son Ernst Christian Mohr (1811-1890) took over responsibility for the book assortment and became sole proprietor, while his brother Georg continued at the helm of the in 1845-founded Heidelberg printing press. The year 1844 saw the launch of the Zeitschrift für die gesamte Staatswissenschaft, which is still being published today under the title of JITE – the Journal of Institutional and Theoretical Economics.

Between 1856 and 1878, Ernst Christian shared management duties with his brother Carl Mohr (1817-1897). The publishing house was then sold in 1878 to the owner of the Tübingen-based H. Laupp'schen Buchhandlung.

Tübingen's H. Laupp'sche Buchhandlung
(Jakob) Heinrich Laupp (1780-1836) was apprentice and employee of Johann Friedrich Cotta and from 1810 onwards oversaw the Cotta'schen Sortimentsbuchhandlung in the town; and although Cotta moved his publishing house to Stuttgart, the bookstore remained in Tübingen. In 1816, Laupp bought the business, transferred it into his own name and began publishing academics works, written principally by Tübingen scholars. On his death in 1836, the business was passed over to his widow Luise Friederike Laupp (1798-1882).

The Leipzig bookseller Hermann Siebeck (1816-1877), who was Heinrich Laupp's son-in-law, headed the firm from 1839, becoming in 1840 co-owner first with Luise Laupp and then from 1847 with her son Rudolf Laupp (1818-1866). The year of Rudolf's death saw Siebeck become sole proprietor. He led the business right up until his death in 1877, whereafter leadership was handed on to Paul Siebeck and J. Gustav Kötzle. 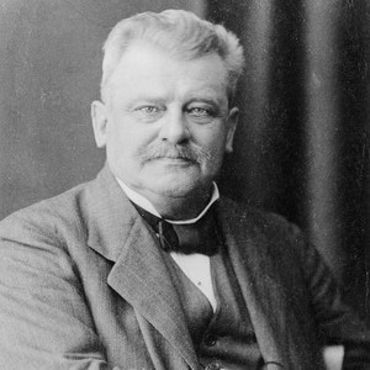 The proprietors of the H. Laupp'sche Buchhandlung, Paul Siebeck (1855-1920) and his brother-in-law J. Gustav Kötzle (1840-1900), bought the publishing house J.C.B. Mohr in 1878. Between 1880 and 1899, Siebeck operated the business alone from Freiburg, while Kötzle oversaw the running of the H. Laupp'sche Buchhandlung in Tübingen. Paul Siebeck named his enterprise The Academic Publishing and Bookselling Business of J.C.B. Mohr, Proprietor Paul Siebeck.

Following the style of the times, he soon shortened it to J.C.B. Mohr (Paul Siebeck) and established the business as a specialist academic publisher with a focus on works of liberal theology, cultural protestantism, the south west German New Kantians and Max Weber-hewn national economists.

During this time, three new journals were introduced to the program. In 1844, the first FinanzArchiv (FA) appeared, followed by the Archiv des öffentlichen Rechts (AöR) in 1886, and, in 1891, the Zeitschrift für Theologie und Kirche (ZThK) joined the ranks as very first theological journal.

The sovereign of the state, the Lord of Baden, bestowed upon Paul Siebeck the Order of the Zähringer Lion. The heraldic animal was soon adopted as the publishing house's emblem and has further evolved into today's company logo. In the beginning, the lion brandished a flag bearing the motto artibus ingenuis: dedicated to the noble arts.

In 1895, Paul Siebeck came into contact with Max Weber, who was to become the publisher's most important advisor and whose Complete Works (MWG) still serve as one of Mohr Siebeck's corner stones.

The year 1899 saw Paul Siebeck return to Tübingen where he headed both Mohr and Laupp until 1920. During this time, the first edition of theology's standard lexicon Religion in Geschichte und Gegenwart (RGG), edited by Friedrich M. Schiele and Leopold Zscharnack, appeared. 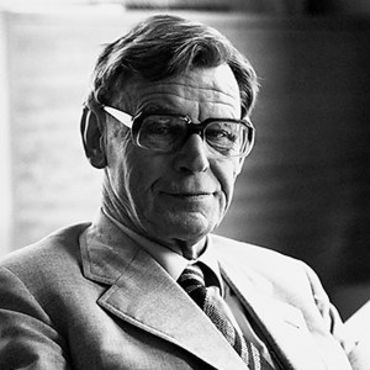 Paul Siebeck's son Oskar Siebeck (1880-1936) took over the family business J.C.B. Mohr in 1906 and ran for a short time (1913-1920) a branch in Berlin. The outbreak of the First World War saw numerous restrictions placed on the publishing house: projects with international authors were put on ice and certain themes were out of bounds.

Paper shortages and censorship hindered the production side of things, while inflation caused continuous need for price readjustment.

Between 1920 and 1936, Oskar Siebeck ran the business along with his brother Werner Siebeck (1891-1934). The pair focused on theology, philosophy, economics, and law, buying in 1926 the journal FinanzArchiv from the Verlag Cotta in Stuttgart. Founded in 1844, the FA is today also known as the Public Finance Analysis and published exclusively in English. The sale of medicine and forest management publications meant that the H. Laupp'sche Buchhandlung became less important than J.C.B. Mohr (Paul Siebeck).

In 1935, Oskar's son Hans Georg Siebeck (1911-1990) joined his father's business, managed it until 1976 and remained a shareholder for the rest of his life. During the Third Reich and the Second World War, the publishing house's turnover collapsed when many authors were forced to emigrate and difficulties with sales grew both at home and abroad. Shortly before his death, Oskar was forced to lay off over two thirds of his employees.

In 1945 after the end of the war, Hans Georg Siebeck was one of the first in the French occupied zone to receive a business operator's license and was so able to re-build the company. The Deutsche Rechts-Zeitschrift was first published in 1946 and since 1951 has appeared every two weeks as the JuristenZeitung (JZ).

The collaboration with the Leo Baeck Institute began in 1957 and marked the establishment of Jewish Studies, a field that stands independently of the theological publishing program. 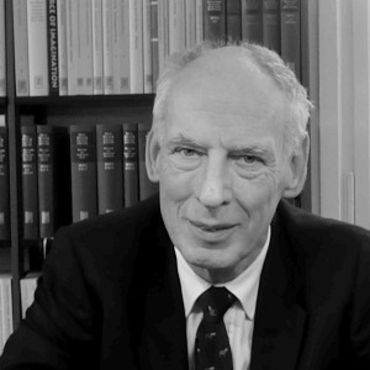 He initiated and implemented the transformation of the press into an increasingly international and modern enterprise. It was his aegis to appoint specialist editors, and as series and journals started to appear in several languages or English alone, editorial boards also became more international. The number of publications sold abroad rose to 40 percent and is still climbing.

The name Mohr Siebeck replaced the rather cumbersome J.C.B. Mohr (Paul Siebeck) in 1996. In order to ensure independent survival, Mohr Siebeck was transformed in 2003 firstly into a sole proprietorship company (Mohr Siebeck e.K.) and then in 2005 acquired limited partnership status (Mohr Siebeck GmbH & Co. KG). The two long-term editors of the law and theology and Jewish studies programs, Dr. Franz-Peter Gillig and Dr. Henning Ziebritzki, were made fellow managing directors to Georg Siebeck in 2005 and since January 2015 have sole responsibility for the running of the business. 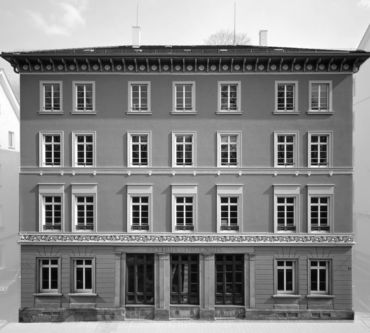 Following Georg Siebeck’s retirement in 2014, the press was jointly run by Dr. Franz-Peter Gillig and Dr. Henning Ziebritzki, with the latter taking over sole responsibility in 2018.

Mohr Siebeck is characterised today by its growing international author and customer portfolios, the upgrading of its program with the addition of new editors, as well as the digitalisation of processes and products.

The press has now developed its own eLibrary to distribute electronic content worldwide. Specialisation in scholarship has been matched by an ongoing broadening of our publishing program. The mainstays of theology, philosophy, law, and economics established in the 1930s have intertwined in recent years to create the following spectrum:

The press's archive dates from 1801; for Laupp and Mohr Siebeck, it is complete from 1878. In 2010 the archive was gifted to the Staatsbibliothek zu Berlin. The library is committed to entering the contracts, correspondence with authors, and reviews in the Kalliope union catalog for academic research.

Go to the Mohr Siebeck's archive at the Staatsbibliothek Berlin