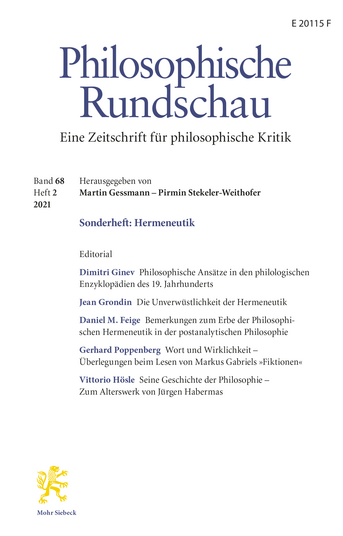 article PDF
DOI: 10.1628/phr-2021-0017
The text examines the »Wirkungsgeschichte« (effective history) of Philosophical Hermeneutics in the context of Anglo-American postanalytic philosophy. Hubert L. Dreyfus is recognized as a philosopher who has systematically put forward a certain reading of Heidegger's legacy, and the Pittsburgh School is examined regarding their relation to Gadamer (especially John McDowell). In the context of the question whether there are systematic positions familiar to Gadamer's, Donald Davidson is also acknowledged. The systematic central point of the text could be phrased like this: The legacy of philosophical hermeneutics lives on today especially in positions that at first sight appear to be rather alien to their origins as regards their theoretical form.
Print
Share
Authors/Editors
Daniel Martin Feige No current data available.