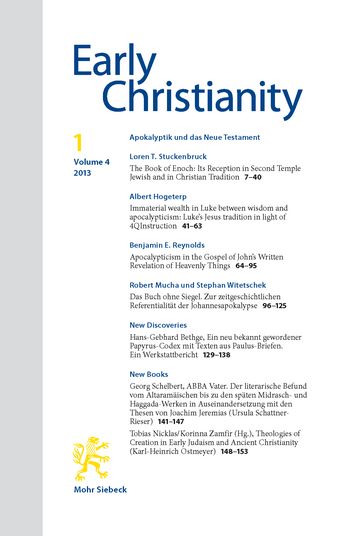 article PDF
DOI: 10.1628/186870313X13624783729128
This article wants to add some methodological precision to the contemporary-historical interpretation of Revelation as it has become conventional: When John the seer refers to the world in which his addressees live, he does not only produce an encoded picture thereof, but, within his world of images and by his radicalizing interpretation and evaluation, he endows it with added cognitive value: The book wants to enable its readers to make sense of the world in which they live. Basic hermeneutical reflections and three case studies (Rev 2–3; Rev 6; Rev 13/17) show that the imagery of Revelation does depart from concrete phenomena in the cities of Asia Minor, but, at the same time, moves beyond mere historical reference.
Print
Share
Authors/Editors
Robert Mucha No current data available.