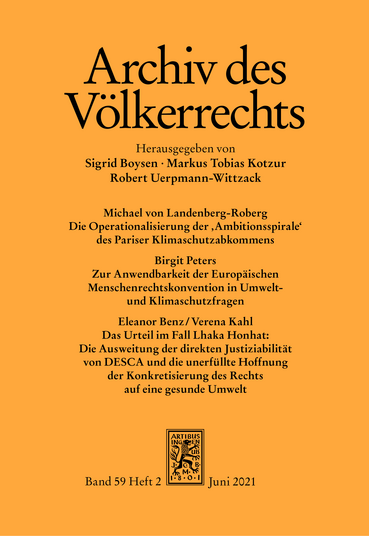 article PDF
DOI: 10.1628/avr-2021-0011
In February 2020, the Inter-American Court of Human Rights (IACtHR) delivered a landmark decision in which it held Argentina responsible for the violation of several rights of 132 indigenous communities inhabiting a certain area in the province of Salta. In the Case of the Indigenous Communities of the Lhaka Honhat (Our Land) Association v. Argentina the IACtHR declared for the first time an autonomous violation of the right to a healthy environment and other DESCA (Economic, Social, Cultural and Environmental rights). Thereby, it further developed its case law on the direct justiciability of DESCA on the basis of Article 26 of the American Convention on Human Rights (ACHR) that was first established in Lagos del Campo in 2017. Focusing on the right to a healthy environment and the right to water the authors critically examine how the Court derived the direct justiciability of DESCA. In the following, the contribution examines to what extent the right to a healthy environment has been specified in the current judgment compared to the initial outline of this right by the Court in its Advisory Opinion No. 23. The analysis also deals with the question whether the facts of the case were at all suitable for such a specification and what general value could be added by an autonomous examination of DESCA. Finally, the contribution ends with a mixed conclusion on the significance of the judgment and a thoughtful outlook on the future development of the case law on Art. 26 ACHR.
Print
Share
Authors/Editors
Eleanor Benz No current data available.