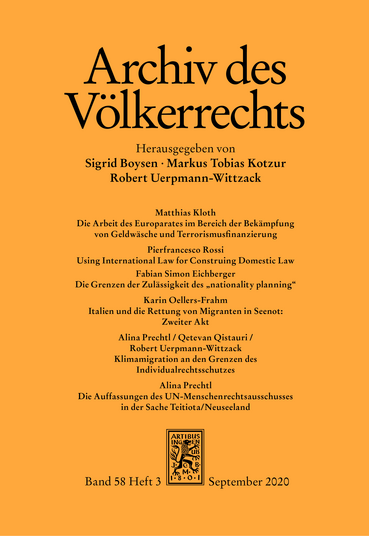 article PDF
DOI: 10.1628/avr-2020-0016
The Council of Europe – in its role as an intergovernmental, pan-European organisation with the aim to protect human rights, democracy and the rule of law in its 47 member states – has been actively contributing for several decades to the global efforts to combat money laundering and terrorist financing. The organisation has elaborated the only internationally binding treaty to combat both money laundering and terrorist financing. Its »Committee of Experts on the Evaluation of Anti-Money Laundering Measures and the Financing of Terrorism (MONEYVAL)« evaluates 34 states and jurisdictions against the global standard in this field, and forms an integral part of the global network of anti-money laundering and counter-terrorist financing bodies with the Financial Action Task Force (FATF) at its centre. The present article describes how anti-money laundering and counter-terrorist financing efforts form an integral part of the rule of law-pillar of the Council of Europe, and how such efforts complement the respective activities by the FATF and the European Union. Moreover, the article lists the Council of Europe's related activities against corruption, organised crime and terrorism. It describes the manner in which these efforts are reconciled with existing human rights norms, most notably the European Convention on Human Rights (as applied and interpreted by the European Court of Human Rights). The article finishes with an overview of Council of Europe measures which are designed to protect investigative journalists who expose corruption and money laundering scandals.
Print
Share
Authors/Editors
Matthias Kloth No current data available.