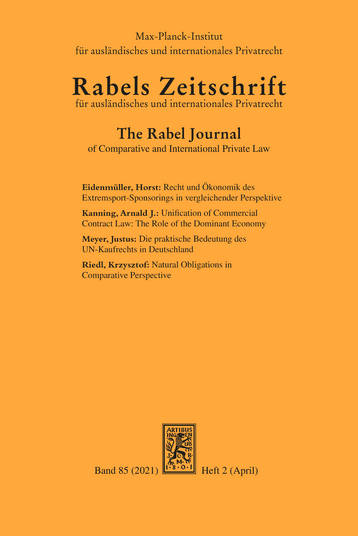 article PDF
DOI: 10.1628/rabelsz-2021-0004
The Practical Significance of the CISG in Germany. – The UN Sales Law is in different respects a clear success: worldwide, reforms of contract law are oriented towards the CISG. In September 2020 Portugal became the 94th contracting state. The importance of international trade in goods is steadily increasing. However, there is still uncertainty about the acceptance of UN sales law by internationally operating companies and their legal advisors. The present study is based on a survey of 554 attorneys in Germany and compares the answers with results from 2004 as well as from Austria and Switzerland. According to this survey, the international sales contracts heard by courts and arbitrators are predominantly not subject to UN sales law and the proportion of those who regularly use a choice-of-law clause with CISG exclusion has even risen from 42.2 to 52.9 % since 2004. In Austria and Switzerland this proportion has also risen and is even higher than in Germany. Many lawyers are well aware of the advantages of a neutral legal regime. However, it seems to be easier for them to recommend choice-of-law clauses that exclusively invoke domestic law.
Print
Share
Authors/Editors
Justus Meyer No current data available.