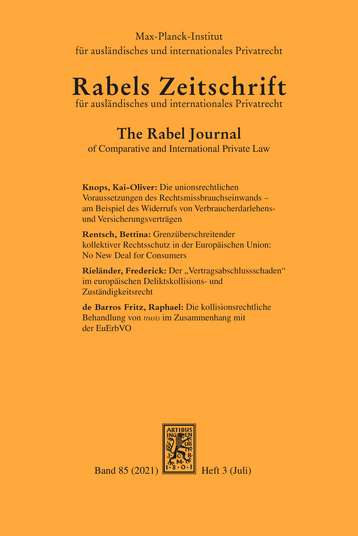 article PDF
DOI: 10.1628/rabelsz-2021-0023
In the European Union, it is apparently only in Germany that withdrawals by consumers and policy-holders are often rejected as invalid and abusive. Mostly it is argued that an objection of abuse is subject to national law and that application of the principle of good faith is a matter for the judge alone. In fact, the jurisprudence of the Court of Justice of the European Union sets strict limits on the objection of abuse and requires special justification, which the national legal system must comply with in accordance with the primacy of European Union law. Under EU law, withdrawal from consumer loans and insurance contracts will be vulnerable to an objection of legal abuse only in very exceptional cases and by no means as a rule.
Print
Share
Authors/Editors
Kai-Oliver Knops Geboren 1966; Studium der Rechtswissenschaften in Trier, Köln und Heidelberg; 1999 Promotion; 2007 Habilitation; Professor für Zivil- und Wirtschaftsrecht, insbes. Bank-, Kapitalmarkt- und Verbraucherrecht, an der Universität Hamburg.