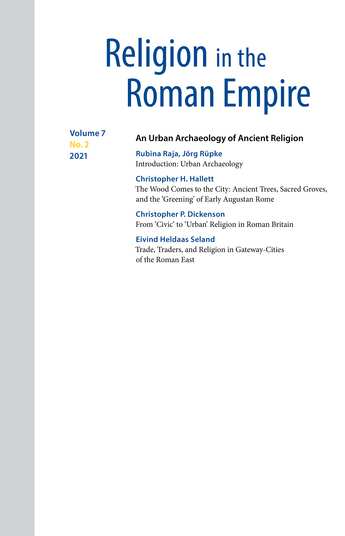 From 'Civic' to 'Urban' Religion in Roman Britain

article PDF
DOI: 10.1628/rre-2021-0018
Open Access
Read
For Roman Britain there has been much discussion of both urbanism and religion but surprisingly little consideration of religion as an urban phenomenon. A certain tension exists between the ways that the two subjects have been approached. On the one hand towns have typically been seen as the most pronounced expressions of a move toward a more Roman way of life in the province. On the other hand religion is seen as the area of culture where local traditions remained strongest. Moreover, a distinction is often implied between more Roman-looking and more 'civic' aspects of the province's religion and more indigenous-looking aspects that are sometimes seen as more 'rural'. This article examines these tensions and explores the role played by religion in creating a form of urban life unique to the province.
Print
Share
Authors/Editors
Christopher P. Dickenson No current data available.