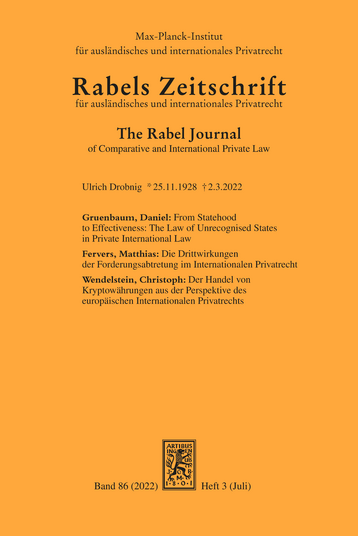 From Statehood to Effectiveness: The Law of Unrecognised States in Private International Law

article PDF
DOI: 10.1628/rabelsz-2022-0053
One of the functions of private international law (PIL) is to determine the law that governs a legal relationship. Yet what occurs when the rules designated by PIL emanate from an entity that has not been recognised as a state by the government of the forum? This article aims firstly to identify and describe the major prevailing approaches to applying the law of unrecognised states in contemporary PIL practice. It then critically appraises the principal reasons justifying the application of foreign law despite it emanating from unrecognised states. The article finally argues that applying the law of unrecognised states reveals the potential for PIL to grapple with non-state rules and with interactions of normative orders of all different sorts, regardless of their state pedigree.
Print
Share
Authors/Editors
Daniel Gruenbaum is Professor at the University of the State of Rio de Janeiro, Brazil.

Daniel Gruenbaum is Professor at the University of the State of Rio de Janeiro, Brazil.

More From Author / Editor
Daniel Gruenbaum is Professor at the University of the State of Rio de Janeiro, Brazil.