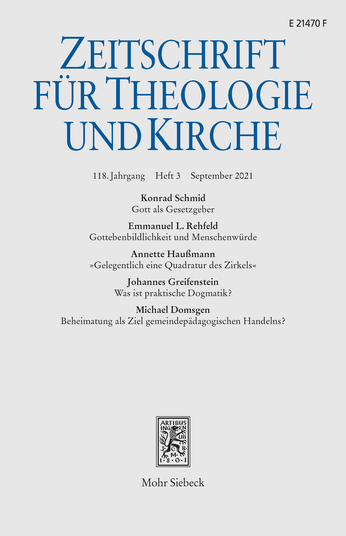 article PDF
DOI: 10.1628/zthk-2021-0016
As the climate continues to change, the debate about the energy revolution remains an immensely important one. In the 1970s and 80s, Protestant scholars from the Protestant Institute for Interdisciplinary Research (FEST) participated in the ethical debate concerning nuclear energy in the old German Federal Republic (BRD). In view of social and scientific specialisation and differentiation, arguments for Protestant participation in the ethical debates became crucial. In addition, new challenges were thrown up by a consciousness of crisis within the academic community as well as by the development of new social movements, which led to a transformation in how research is communicated. Areas of tension between the church, research, and the public brought about intensive processes of reflection and increased the relevance of differentiated forms of communication. Central characteristics of Protestant communication are the use of religious language and the assumption of social responsibility, which strengthen Protestant identity. Ultimately, the FEST was challenged in the debate to address the increasing complexity of the scientific landscape on the one hand and the growing need to offer differentiated information to the public on the other.
Print
Share
Authors/Editors
Annette Haußmann Geboren 1983; Dr. theol.; Dipl. Psych.; Juniorprofessorin für Praktische Theologie mit dem Schwerpunkt Seelsorgetheorie an der Ruprecht-Karls-Universität Heidelberg und Psychologische Psychotherapeutin für Kognitive Verhaltenstherapie.
https://orcid.org/0000-0003-1506-6822