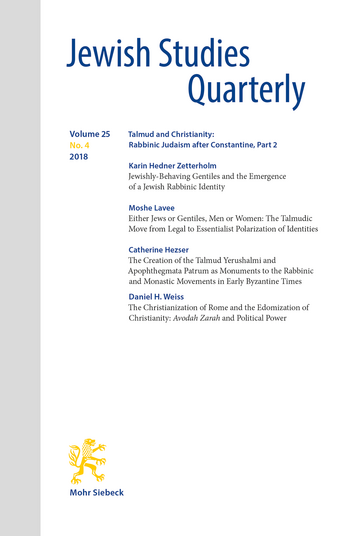 Jewishly-Behaving Gentiles and the Emergence of a Jewish Rabbinic Identity

article PDF
DOI: 10.1628/jsq-2018-0017
In antiquity, Jesus-orientation was not a clear demarcation between Jews and Christians, but an option within the broader Jewish community. This paper discusses the role that Jesus-oriented Jews and Gentiles played for the emergence of a Jewish rabbinic identity. It suggests that the adoption of Jewish practices by Gentile Jesus-followers and the closer social contacts between Jesus-oriented Jews and Jesus-oriented Gentiles led to a blurring of the boundary between Jews and Jewishly-behaving Gentiles within the Jewish community, and that this was one of the factors which contributed to a redefinition of Jewishness in rabbinic terms that identified Jews alone as members of God's covenant and bound by its laws.
Print
Share
Authors/Editors
Karin Hedner-Zetterholm No current data available.