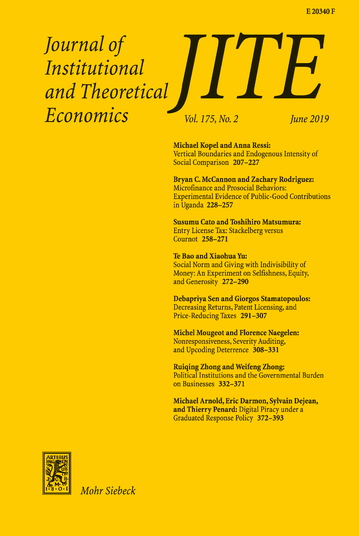 article PDF
DOI: 10.1628/jite-2018-0010
Microfinance is an important component of the fight against poverty. We ask whether access to microfinance loans by the poor relates to their prosocial behaviors. A lab-in-the-field study in southern, rural Uganda is done. A public-good game is used to measure subjects' willingness to free-ride. We document higher levels of contributions by those who have previously received a microloan. We explore potential explanations such as differing social-norm assessments, measurable income effects, or sample selection bias. Receiving a microloan continuesto have an independent effect on prosociality. The results suggest that exposureto microfinance correlates with social preferences.
Print
Share
Authors/Editors
Bryan C. McCannon No current data available.