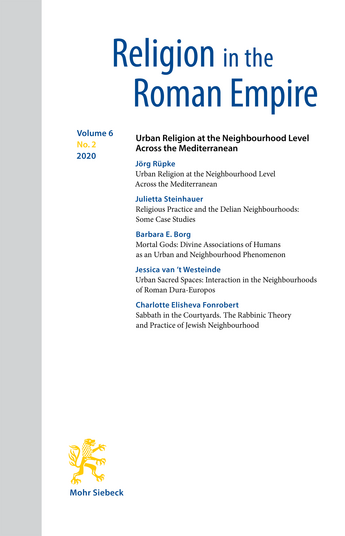 Mortal Gods: Divine Associations of Humans as an Urban and Neighbourhood Phenomenon

article PDF
DOI: 10.1628/rre-2020-0012
This paper is concerned with a phenomenon that is poorly documented in any of our traditional sources, but which was potentially much more widespread than usually appreciated: mortal individuals' association with the divine in late Republican and imperial-period Rome. It is argued that divine acclamation and honours were normally a matter for a limited group of people who felt a specific attachment or obligation towards a particular person, and that, for this reason, domestic and neighbourhood contexts are the most frequent locations for their celebration. At the same time, while there is evidence for such worship in large rural villas and smaller towns, the bulk of the Western evidence comes from the city of Rome, suggesting that the urban environment was particularly conducive to the development of a range of forms of divine associations, including divine acclamations and worship, praise of character features perceived as divine, and the adoption and worship of tutelary deities.
Print
Share
Authors/Editors
Barbara Borg ist Professorin für 'Classics' (Spezialisierung Klass. Archäologie) an der Universität Exeter.