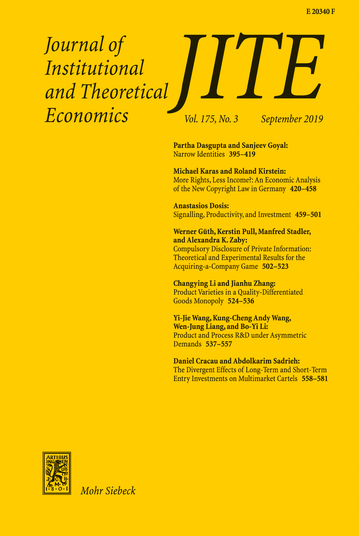 article PDF
DOI: 10.1628/jite-2018-0014
This paper analyzes market versus optimal product varieties in a vertically differentiated goods monopoly. Four results are obtained. First, compared to the first- or second-best optimum, product varieties are always undersupplied by a monopolist. Second, the quality range under a monopoly is smaller than that under the first- or second-best optimum. Third, the monopolist distorts the lowest quality upward while distorting the highest quality downward. Finally, a fixed-cost subsidy can lead to a second-best outcome where a social planner determines the number of product varieties and the corresponding qualities, and the monopolist decides the prices.
Print
Share
Authors/Editors
Changying Li No current data available.