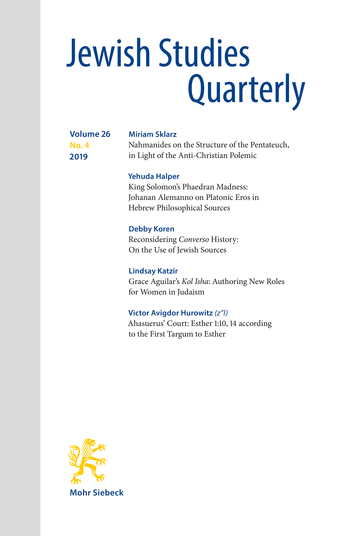 Reconsidering Converso History: On the Use of Jewish Sources

article PDF
DOI: 10.1628/jsq-2019-0024
Modern works on the Spanish and Portuguese Inquisitions, the Spanish and Portuguese expulsions of Jews, and the phenomenon of crypto-Judaism often rely on Jewish sources contemporary to that historical period to prove their claims. This is particularly true of Benzion Netanyahu, Marranos of Spain (1999), and Norman Roth, Conversos, Inquisition and the Expulsion of the Jews from Spain (2002). Because these works are still often cited, even though some of their conclusions are no longer widely accepted, this article outlines specific criticisms of their methodology: inaccuracies in quoted source texts and their attributed authorship, inaccuracies in translation and interpretation, disregard for the distinction between halakhic codes and responsa as reflections of an author's opinion, disregard of the agenda-driven nature of some responsa, and reliance on too small a sample of the responsa literature.
Print
Share
Authors/Editors
Debby Koren No current data available.