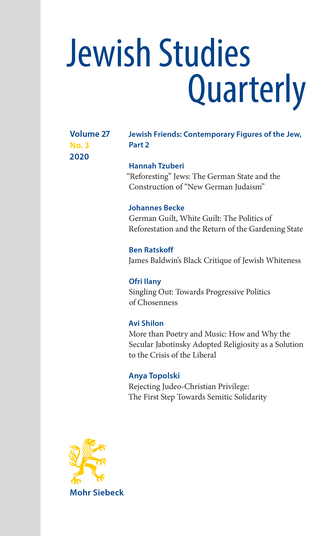 »Reforesting« Jews: The German State and the Construction of »New German Judaism«

article PDF
DOI: 10.1628/jsq-2020-0015
This article argues that German post-unification state ideology entails a »return of Jews« and the »flourishing of Jewish life« as a means of readmission into the circle of civilized nations. Drawing on parliamentary debates about the migration of Jews from the former Soviet Union, it foregrounds the state as a central player in revival politics and demonstrates how state-administered revival politics are oriented towards the reconstruction of German Jewry in the image of a substantially German, acculturated pre-war community. It contextualizes the recent establishment of rabbinical and confessional schools in a German state university within German revival politics and argues that the successful incorporation of Jews into the new German nation-building project indicates the neutralization of the past within institutional memory and minority politics.
Print
Share
Authors/Editors
Hannah Tzuberi No current data available.