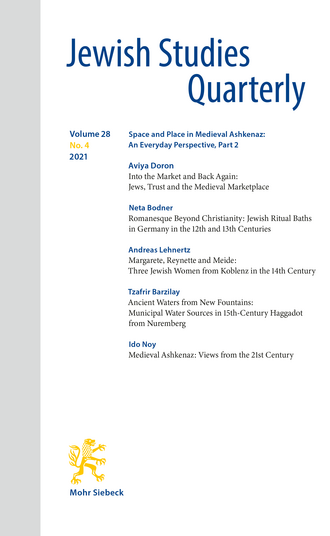 Romanesque Beyond Christianity: Jewish Ritual Baths in Germany in the 12th and 13th Centuries

article PDF
DOI: 10.1628/jsq-2021-0021
This article examines Jewish Christian relations in the High Middle Ages through the prism of religious architecture and ritual, focusing on the architecture of Jewish ritual baths from the Rhineland region in Germany. I argue that the baths of Speyer, Worms, Friedberg, Offenburg and Cologne were designed to maximize the experiential power of ritual immersion and arouse symbolic associations to support the ceremony. Architectural details such as unusual depth, ornament, lighting schemes and monumentality contributed to a spectrum of immersion ceremonies described in contemporary sources. These are contextualized in concurrent developments in Christian religious architecture and ceremonial use of architectural space.
Print
Share
Authors/Editors
Neta Bodner No current data available.