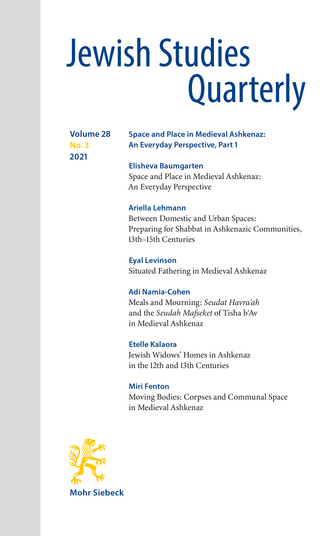 article PDF
DOI: 10.1628/jsq-2021-0015
Fatherhood in medieval Ashkenaz was a complex sociological phenomenon, manifesting both stern and affectionate attitudes towards children. Fathers were expected to treat misbehaving children harshly, but this disciplinary attitude was inseparable from paternal love and physical contact between fathers and children. Spaces influenced paternal behavior: appropriate fatherly behavior in the synagogue differed from how fathers were expected to treat their children at home. This article focuses on two internal domestic loci: the cellar and the family table. The study of the cellar demonstrates not only harsh paternal behavior, but also the limitations of fatherhood: expelling children from home was a last resort for fathers who could not otherwise exert their paternal authority when paternal attempts to motivate children to internalize normative behavior were not successful. The study of the family table sheds light on the nurturing and educative aspects of domestic fatherhood; it manifests its affectionate characteristics and reveals gender constructions.
Print
Share
Authors/Editors
Eyal Levinson No current data available.