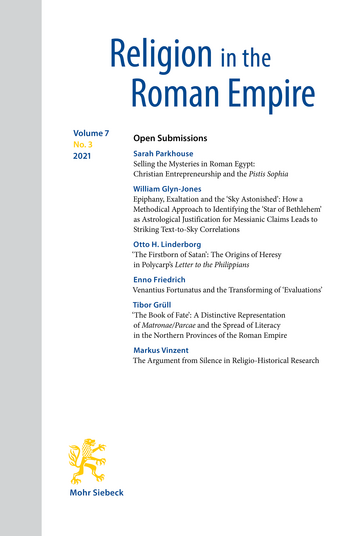 'The Book of Fate'

article PDF
DOI: 10.1628/rre-2021-0026
Open Access
Read
There are ca. one thousand inscriptions and a few dozen reliefs dedicated to or representing the goddess-triad called Matres/Matronae. A distinctive kind of representation shows the deities not with the usual fruit basket in their laps, but with an infant wrapped in strips of cloth, a scale, and an open book-scroll. To understand the potential meanings of this representation, we need to consider two things. One is the fusion of the Matres/Matronae and the Moirai/Parcae, who were – in classical Greco-Roman mythology – responsible for the fate of the child to be born. The other is that both in Greek and Roman cultural areas, the Moirae/Parcae were related to writing, so depictions of them often also contained book-scrolls. Moreover, the Parcae were also known by the Romans as Carmenta, who sang charms (carmina) at birth, which have also been recorded on writing tablets or book-scrolls. The spread of the cult and representations of these goddesses would not have been conceivable, of course, without widespread literacy and classical education in the first and second centuries in the Germanic and Gallic provinces of the Roman empire.
Print
Share
Authors/Editors
Tibor Grüll No current data available.