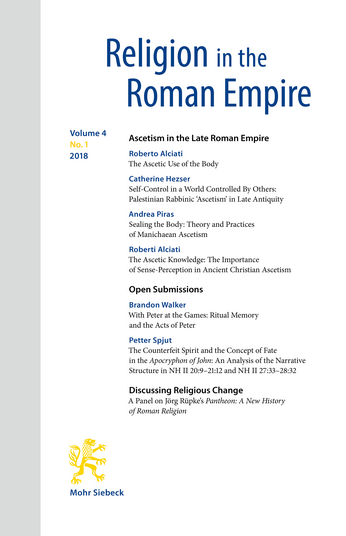 article PDF
DOI: 10.1628/rre-2018-0007
In this article, it is argued, through a close comparison between the account of the material creation of Adam in NH II 20:9–21:12, and the account of the creation of fate and binding of humanity in NH II 27:33–28:32, that Ap. John presents the Counterfeit Spirit as closely associated to the concept of fate. Further, it is suggested that the Counterfeit Spirit/fate is used in Ap. John as a solution to the theodicy dilemma and to reconcile the notion of external powers influencing the actions of humanity with the notion of people as responsible for their own actions. Furthermore, the discourse of fate/the Counterfeit Spirit plays a decisive role in the moral exhortations of the text. Fate is presented as an actual threat in Ap. John – as a concept with the power to enslave those who stray too far from the practices advocated in the text.
Print
Share
Authors/Editors
Petter Spjut No current data available.