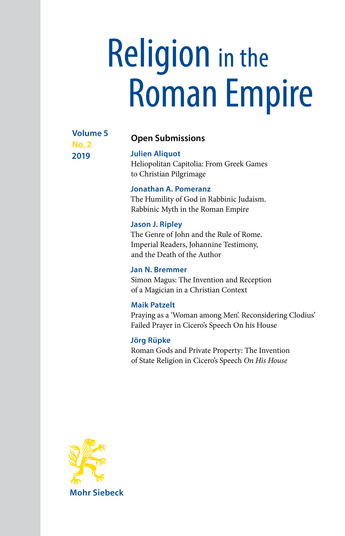 article PDF
DOI: 10.1628/rre-2019-0013
What are the social and political implications of writing a biography of Jesus? This paper probes the wider significance of John's written work and the genres it participates in. I will first establish the political dimension of writing in the early imperial period, focusing on efforts from Augustus to Hadrian to exercise power over written works and authors via practices ranging from destruction of texts to the exile and execution of authors, particularly biographers of Stoic resisters to imperial rule. Next, I will explore how the risks of authoring in this period parallel the pattern of testimony and hostility experienced by Jesus and his followers in the narrative, and how John adapts the core Socratic elements of the exitus literature lauding Stoic martyrs to portray Jesus' departure and death. Finally, I will explore how the genre of John and the characterisation of writing and authorship that emerges in the endings of the Gospel critically engage Roman authority with cruciform alternatives.
Print
Share
Authors/Editors
Jason J. Ripley No current data available.