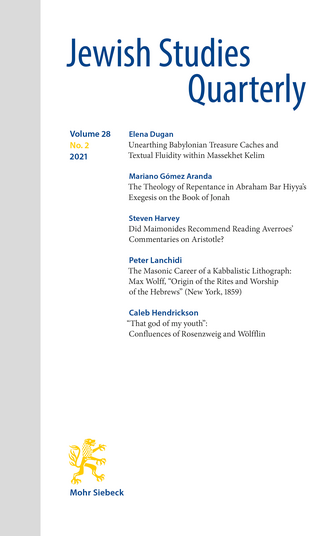 The Masonic Career of a Kabbalistic Lithograph: Max Wolff, »Origin of the Rites and Worship of the Hebrews« (New York, 1859)

article PDF
DOI: 10.1628/jsq-2021-0010
This article presents the Masonic career of a kabbalistic lithograph in the United States in the middle of the 19th century, against the background of a sectarian debate that concerned the religious character of Freemasonry. In their struggle for equality, Jewish Freemasons took advantage of the Solomonic heritage of Masonic mythology and advocated a Jewish origin for the fraternity, in which Kabbalah assumed a role of providing esoteric underpinnings for this narrative. The article shows that within the wider historical framework of Jewish-Christian relations, the kabbalistic lithograph became a tool in the hands of Jewish Freemasons in a Masonic sectarian debate.
Print
Share
Authors/Editors
Peter Lanchidi No current data available.