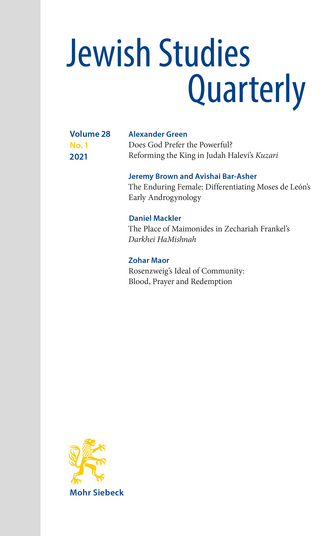 article PDF
DOI: 10.1628/jsq-2021-0004
Zechariah Frankel's Darkhei HaMishnah (1859) has been treated in the literature as either a) an early critical-textual work on the Mishnah or b) a novel theological statement for the human origin of the Mishnah. By examining the relation of Darkhei HaMishnah to Maimonides − another pioneering mishnaic scholar − I depart from both of these frames. Beyond the bounds of critical-textual scholarship, Darkhei HaMishnah casts the rejection of Greek philosophy as the founding intellectual gesture of rabbinic Judaism; this ultimately leads Frankel to deny that Maimonides was genuinely invested in the reasons for the commandments, or even in philosophy more broadly. On the question of the Mishnah's origin, Maimonides himself radically circumscribed the revelation of Oral Torah, and, like Frankel, he was roundly criticized for it. More than the novelty of Frankel's claim, the particular religious anxieties of 19th-century Germany Jewry were the necessary conditions for the controversy around Darkhei HaMishnah.
Print
Share
Authors/Editors
Daniel Mackler No current data available.