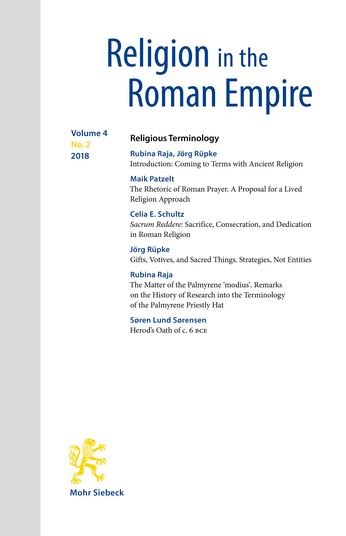 The Rhetoric of Roman Prayer

A Proposal for a Lived Religion Approach

article PDF
DOI: 10.1628/rre-2018-0015
his article seeks to challenge the prevailing view on Roman prayer as a formalised act. Rather than analysing prayer as 'authentic' text, as a fixed set of formulae and gestures or as an expression of normative but secret priestly knowledge, the paper seeks to uncover prayer as an expression of 'lived religion'. Subsequent to a critical appraisal of research history, this paper provides a new model of prayer to that end. Drawing on ritual theory and psychology of religion, this model refers to prayer as multidimensional communication that requires individually embodied competence for performing prayers. It then validates and nuances this model out of the ancient material. I argue that the individual competence of performing prayer results from rhetoric skills which must be analysed in context. The paper emphasises the individual competences that do not draw on mandatory practices but on the individually embodied resources to which rhetorical practices, among many others, belong.
Print
Share
Authors/Editors
Maik Patzelt Born 1987; lecturer in Ancient History at the University of Osnabrueck, Germany.

Maik Patzelt Born 1987; lecturer in Ancient History at the University of Osnabrueck, Germany.