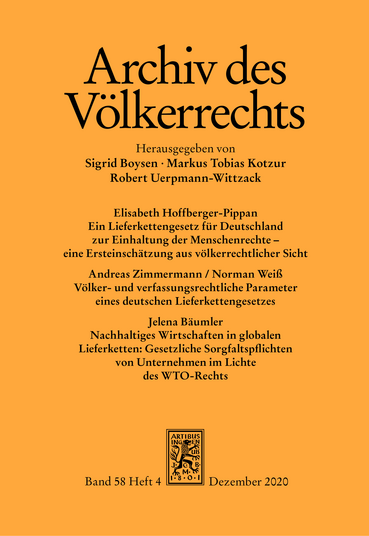 article PDF
DOI: 10.1628/avr-2020-0028
Currently a political debate is ongoing in Germany as to whether Germany should, following the example of several other European countries such as France and the Netherlands, adopt a Supply Chain Act (Lieferkettengesetz). If adopted, the act in question would impose due diligence obligations on German corporations to prevent human rights violations taking place in their respective global supply chains. It is against this background that the article examines the preconditions that must be met in order for such act to be eventually compatible with both, German constitutional and international law. The authors further deal with the question whether Germany might even be obliged under international, as well as under German constitutional law, to enact such a supply chain law in order to protect the human rights of workers employed by companies forming part of the global supply chains of German companies. As far as German constitutional law is concerned the article notably deals with the question whether it is the Federal parliament that may adopt such a law also taking into account the competencies of the European Union in the field, and what are the requirements of legal specificity and proportionality in order for the draft law to stand constitutional scrutiny. The authors further offer detailed suggestions how corporate due diligence standards might be best provided for in the envisaged law and propose a risk analysis approach that varies not only according to specific countries and sector-specific characteristics, but that by the same token also takes into account the ability of the respective German company to exercise an appropriate due diligence standard when it comes to human rigths issues arising within the framewok of their supply chain. As far as the substantive human rights standards are concerned that should serve as benchmarks for the envisaged Supply Chain Act the authors propose to rely on, and refer to, those instruments such as the ICCPR and the CESCR, as well as the ILO treaties containing core labour standards, that enjoy almost universal acceptance and reflect customary international law.
Print
Share
Authors/Editors
Andreas Zimmermann No current data available.