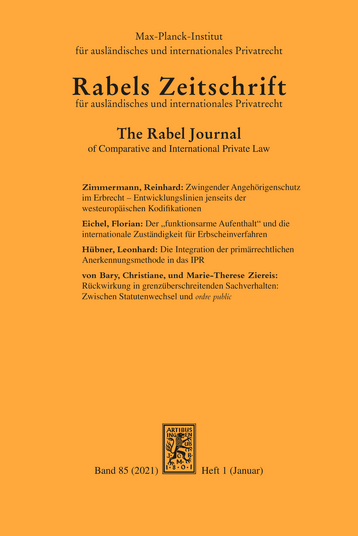 article PDF
DOI: 10.1628/rabelsz-2020-0092
Mandatory Family Protection in the Law of Succession. – Following on from an earlier contribution devoted to the development of the notions of forced heirship and compulsory portion, this contribution pursues the development of mandatory family protection for legal systems beyond the West European codifications: in postsocialist countries of Central and Eastern Europe, in Nordic states, in South and Central American codifications, and in countries without a code of private law, i.e. England and the legal systems originally based on English law. An interesting panorama of different solutions thus presents itself, in particular legal systems operating with fixed shares in the estate, those making available a fixed share only in cases of need, those awarding a sum substituting for maintenance claims, or those turning the claim of the closest relatives into a discretionary remedy. Overall, an observation made in the previous essay is confirmed: a tendency towards achieving greater flexibility in legal systems traditionally operating with fixed shares. The concept of family provision originating in New Zealand, while providing a maximum degree of flexibility, cannot however serve as a model to be followed. The question thus arises whether maintenance needs are the criterion balancing legal certainty and individual justice in the comparatively best manner.
Print
Share
Authors/Editors
Reinhard Zimmermann ist Direktor am Max-Planck-Institut für ausländisches und internationales Privatrecht und Professor an der Bucerius Law School, Hamburg.
https://orcid.org/0000-0003-0348-7929