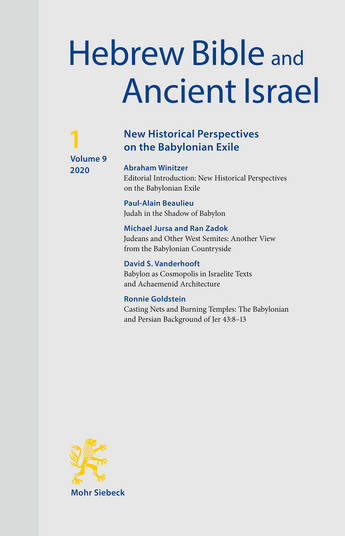 Babylon as Cosmopolis in Israelite Texts and Achaemenid Architecture

article PDF
DOI: 10.1628/hebai-2020-0005
Texts of the Hebrew Bible demonstrate a familiarity with the city of Babylon – in terms of frequency and depth – that exceeds any similar consideration of other cities beyond Israel. Babylon was the quintessential foreign city. Its imposing architecture, particular topography, and learned traditions elicited consideration throughout Israel's texts. The story of the »city and tower« in Genesis 11:1–9 even concedes, contrary to the arguments of most scholars, that the Tower was completed and stood, in a real sense, as the pole around which Israel's historical narratives revolve. Meanwhile, for the earliest Achaemenid kings of the Persian empire, the city of Babylon offered architectural exemplars for use in their new imperial koine. One structure in particular, the Ishtar Gate of Babylon, made a dramatic impression and prompted construction of an exact replica at Tol-e Ajori, a site west of Persepolis excavated in recent years by a joint Italian-Iranian team. The structure at Tol-e Ajori represents a kind of homage, a celebration in brick of Babylon's cosmic monumentality. The Israelite literary concern with Babylon and the Achaemenid architectural one both illustrate that the city had a special place in ancient reflection about the nature of the urban landscape.
Print
Share
Authors/Editors
David S. Vanderhooft No current data available.