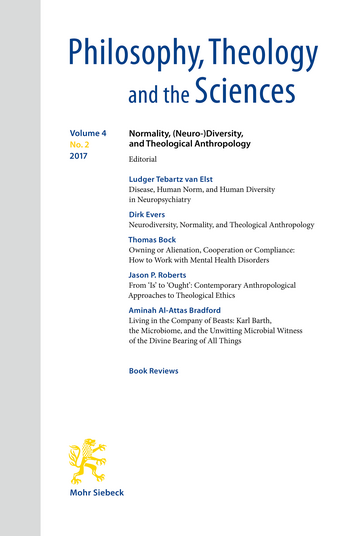 article PDF
DOI: 10.1628/ptsc-2017-0003
In everyday language as well as scientific language, there are but few terms and concepts with such a comprehensive negative meaning and connotation as the term 'dis-ease.' Disease is a universal evil. Nobody wants disease and everybody would agree that disease should be defeated and eradicated. But what if disease strikes one's own body and mind? What if the imperative of disease eradication targets properties of the body which is me? This is the reality for many patients with psychiatric diagnoses and their families. This is the reality of psychiatry. Psychiatry is a clinical discipline in the borderland between natural sciences and humanities. Psychiatric concepts of mental health and disease affect the self-image and self-worth of patients and their families in a very pervasive manner. Therefore, it is important to reflect on what we mean with psychiatric diagnoses, how we define it and how we delineate phenomena we would regard as unusual but healthy from those we would consider reflecting a disease. In this paper, the different meanings of the concept of normality will be presented. I will briefly discuss if or not there is a generally accepted concept of what a disease is. Then I will address the definition of what a psychiatric disorder is. Based on the example of autism, I will finally illustrate that phenomenologically identical medical syndromes can be regarded as well as a norm variant, as a psychological disorder, and as a psychiatric disease. This comprehensive perspective on the diverse phenomena of body and mental functioning illustrates that many if not most of the present psychiatric diagnoses cannot be considered as names of diseases, but as umbrella terms for a wide range of differently caused mental phenomena.
Print
Share
Authors/Editors
Ludger Tebartz van Elst No current data available.