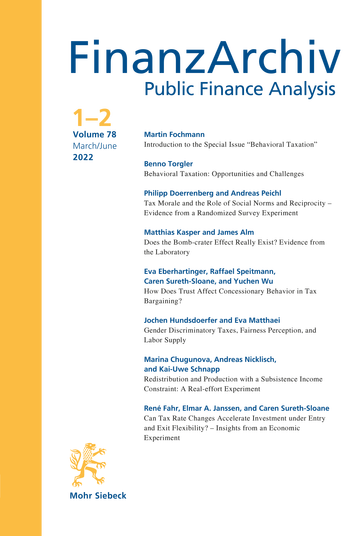 Does the Bomb-crater Effect Really Exist? Evidence from the Laboratory

article PDF
DOI: 10.1628/fa-2021-0014
Laboratory experiments have often found that taxpayers who are audited reduce their compliance immediately after the audit, a response termed the bomb-crater effect. This study uses a laboratory experiment to investigate the bomb-crater effect, including tests of three main behavioral explanations for its existence: making up for losses incurred in the past (loss repair), assuming incorrectly that experiencing an audit decreases the risk of a future audit (misperception of risk), and assessing the probability of a future audit according to the ease of recalling a previous audit (availability heuristic). We find no evidence of a bomb-crater effect. Specifically, when comparing the changes in reporting behavior of audited taxpayers with changes of unaudited taxpayers, we find that audits do not induce a significant behavioral response in general, and they do not induce a bomb-crater effect in particular. Rather, our findings suggest that taxpayer compliance in the laboratory is quite volatile, even absent any audits, and that there is little difference in behavior between audited and unaudited taxpayers. These results have an important methodological implication for laboratory experiments: experimental studies should use control groups of unaudited taxpayers to identify the true causal effect of audits on post-audit tax compliance.
Print
Share
Authors/Editors
Matthias Kasper No current data available.