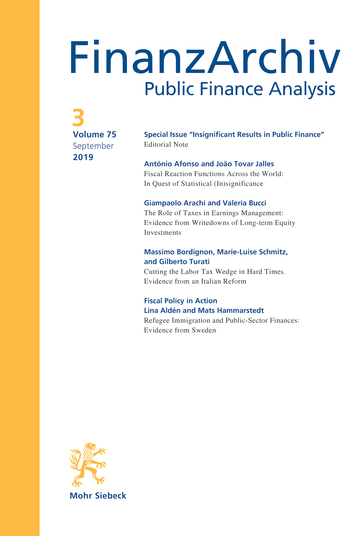 Fiscal Reaction Functions Across the World: In Quest of Statistical (In)significance

article PDF
DOI: 10.1628/fa-2018-0023
We estimate fiscal reaction functions for a panel of 173 countries using data between 1970 and 2014. Most notably, we assess the existence of non-Ricardian regimes, as postulated in the fiscal theory of the price level (FTPL), or, contrarily, the possibility of Ricardian regimes. We find that governments have on average increased the primary balance as a response to higher previous government indebtedness, implying a Ricardian fiscal regime. In addition, the Ricardian results are confirmed for the advanced countries and for the euro area group. A more Ricardian fiscal regime emerged after 1995 and notably in the subperiod 2008–2014, after the global financial crisis (before that, statistical insignificance is the norm). From a P-VAR analysis, we find that increases in government indebtedness increase primary balances, supporting overall the existence of an average Ricardian fiscal regime.
Print
Share
Authors/Editors
António Afonso No current data available.