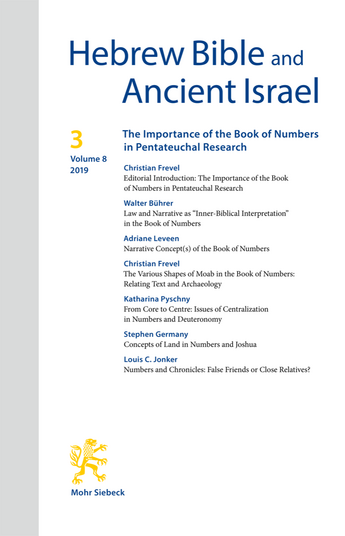 From Core to Centre: Issues of Centralization in Numbers and Deuteronomy

article PDF
DOI: 10.1628/hebai-2019-0020
This paper explores issues of centralization in the books of Numbers and Deuteronomy, predominantly from a conceptual perspective. After dealing with centrality, center and centralization on a socio-theoretical level, the article analyzes three focal points of centralization in Numbers – social order, leadership and economy – and applies this matrix to Deuteronomy in light of a Persian period context. In addition, special interest is given to the dynamic interplay of centralizing and decentralizing tendencies in regard to both books. It will be argued that centralization is to be considered a complex process, in which cultic and ritual aspects play without doubt a significant role, but are by no means as dominant as usually assumed. They have to be complemented by festive and economic aspects and, in addition, issues of competence and power linked to specialized personnel. Even though the books of Numbers and Deuteronomy construe centralization in different ways in detail, the texts attest to quite similar phenomena on a theoretical level: standardization, routinization, social unification, hierachization, etc.
Print
Share
Authors/Editors
Katharina Pyschny No current data available.