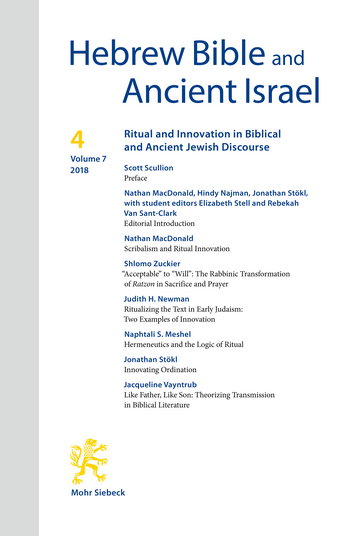 Hermeneutics and the Logic of Ritual

article PDF
DOI: 10.1628/hebai-2018-0030
Accessible Content
Read
The analysis of the Priestly systems of ritual sacrifice (Σ) and purity (Π) played a distinct role in the development of hermeneutics in ancient Israelite and early Jewish literature. A difference between formal properties of the ritual systems of Σ and Π is shown to be homologous to a difference between the hermeneutics applied to texts on Σ and Π, respectively. The possibility is raised that this homology is the product of a causal relationship between the logic of ritual and the logic of hermeneutics – namely, that the distinctive logic underlying the ritual systems themselves played a role in shaping the hermeneutical tools used for the interpretation of the ritual texts.
Print
Share
Authors/Editors
Naphtali S. Meshel No current data available.