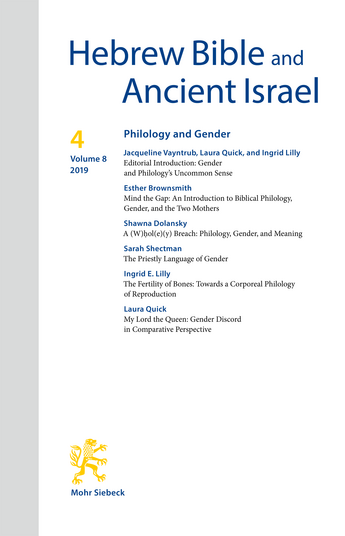 My Lord the Queen: Gender Discord in Comparative Perspective

article PDF
DOI: 10.1628/hebai-2019-0029
Gender discord describes a phenomenon in Biblical Hebrew in which there is a disjuncture between the gender of a pronoun or verb with its antecedent or subject. Typically, scholarship has approached instances of this on the basis of historical Hebrew grammar, arguing that there was a weakening in the distinction of gender in the Second Temple period and hence the feminine plural suffix became subsumed under its masculine counterpart. On the other hand, certain Neo-Assyrian texts employ a similar grammatical strategy in which high-ranking Assyrian women are referred to, reverently, with male titles. Influential women of the court in a society where institutional authority was most often a masculine property come to be seen as »honorary males« in this patriarchal social system. Beyond the grammatical explanation, in this paper I consider the literary effect of gender discord in biblical narrative in light of a comparative semantic study between gender discord in Neo-Assyrian texts and the book of Ruth.
Print
Share
Authors/Editors
Laura Quick No current data available.