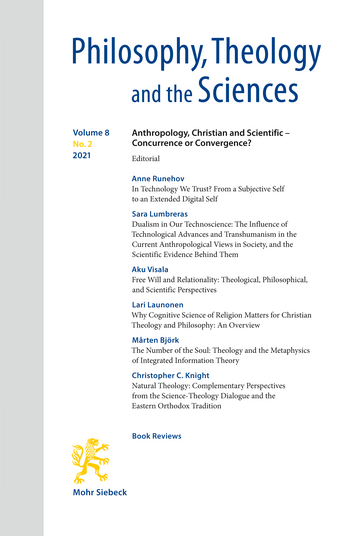 article PDF
DOI: 10.1628/ptsc-2021-0019
This paper argues that the concept of natural theology is clarified when we examine convergences between attitudes to be found in the science-theology dialogue of the late twentieth century and in the 'mystical' tradition of Eastern Orthodox Christianity. Within the dialogue, caution about the capabilities of natural theology arises from both the historical failure of arguments from design and the way in which mid-twentieth century developments in the philosophy of science changed attitudes towards 'rational' arguments. Within Orthodoxy, stress on the apophatic tradition and on the ancient Greek concept of the nous offers a complementary perspective (to be also found in strands of Islam). The understandings of natural theology to be found in the work of Thomas F. Torrance and Alister McGrath are seen as providing a bridge between these converging streams of thought and the relevance of a little noted aspect of Aquinas's thinking is noted. The paper goes on to argue that, even in purely philosophical terms, the kind of 'proof' or 'probability' argument offered by much natural theology is questionable and that an intuitive capacity, linked to spiritual progress, is essential to any authentic natural theology.
Print
Share
Authors/Editors
Christopher C. Knight No current data available.