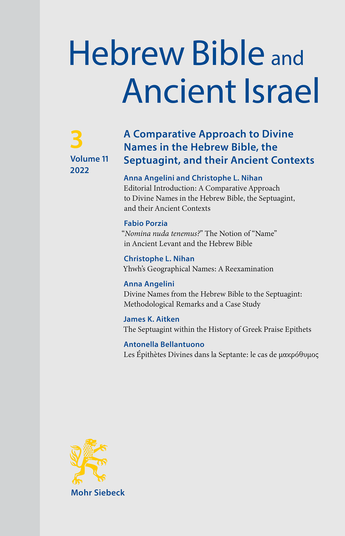 The Notion of »Name« in Ancient Levant and the Hebrew Bible

article PDF
DOI: 10.1628/hebai-2022-0030
This article argues the case for a renewed understanding of the notion of »name,« šēm in Northwest Semitic, especially in reference to gods. In actual fact, this notion has yet to be aligned with the material and the particularly visual turn that has so interested biblical studies over the last decades. For this purpose, two preliminary objectives are put forth: (1) to rid the so-called biblical Name Theology of its nominalist and aniconic tendencies and (2) to read it in light of some occurrences attested by Semitic epigraphy in the Levant. This way, the notion of »name« emerges as the way in which Semitic languages (thus not only the Bible) refer to a god in the most synthetic and holistic way, not only on an abstract and intellectual level but mobilising all the senses.
Print
Share
Authors/Editors
Fabio Porzia No current data available.