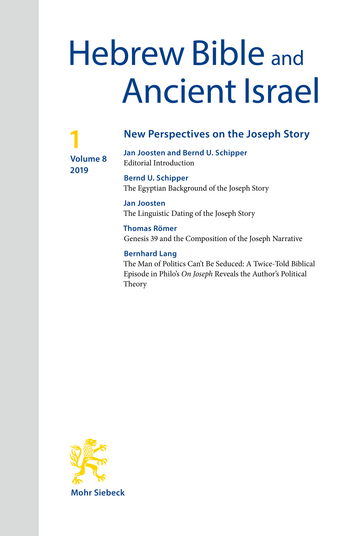 The Egyptian Background of the Joseph Story

article PDF
DOI: 10.1628/hebai-2019-0007
Previous scholarship searched for the Egyptian background of the Joseph story in New Kingdom Egypt and compared Gen 37–50 to the story of Sinuhe and the Tale of the Two Brothers, but a reevaluation of the evidence points to the Egyptian Late Period as the time of the Joseph story's composition. Besides the Egyptian names (Asenat, Potiphera, Zafenat-Paneach) the plot of the Joseph narrative reaches a deeper meaning against the backdrop of the story of the wise Ahiqar, which was found in its Aramaic version on Elephantine, and of an Egyptian papyrus from the Berlin collection, containing the motif of the seven years of hunger. When the evidence is considered together, the Joseph story is best described as a diaspora-novella that puts forward a concept of identity fitting best into the historical situation of Persian period Egypt.
Print
Share
Authors/Editors
Bernd U. Schipper No current data available.