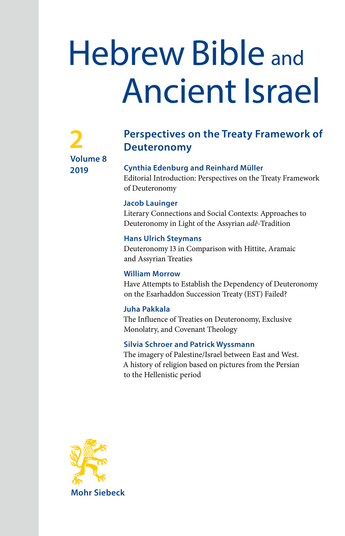 The Imagery of Palestine/Israel between East and West

article PDF
DOI: 10.1628/hebai-2019-0014
The project »The imagery of Palestine/Israel between East and West: A history of religion based on pictures from the Persian to the Hellenistic period« is located at the Institute of Old Testament Studies at the University of Bern. It is currently in its concluding and evaluative phase after three years of funding by the Swiss National Science Foundation. During these years, there has been a comprehensive collection of the data of iconographic evidence from the time span of 539 to 63 B.C.E. The geographic focus lay on Palestine/Israel and all relevant locations regardless of their cultural imprints.1 The compiled images will now be collected in a representative catalog of approximately 300 objects in order to trace the contexts and developmental lines of the motifs. The frequently fragmentary and poorly preserved images from Palestine/Israel are interpreted with the help of comparative pieces from neighboring cultures (Phoenicia, Anatolia, Greece, Syria, Mesopotamia, Persia, and Egypt) and the imperial powers of the time (Achaemenid, Ptolemaic, Seleucid) and reconstructed on the basis of their underlying system of religious symbolism. A compilation of the imagery of Palestine/Israel from this period does not yet exist and represents an important scholarly desideratum.
Print
Share
Authors/Editors
Silvia Schroer No current data available.