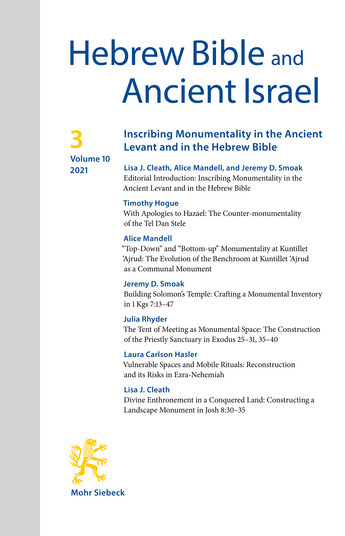 The Tent of Meeting as Monumental Space: The Construction of the Priestly Sanctuary in Exodus 25–31, 35–401

article PDF
DOI: 10.1628/hebai-2021-0018
This article explores how the priestly wilderness shrine functions as a monumental space in the sanctuary construction account of Exod 25–31, 35–40. It draws on spatial theory and studies of monumental architecture to identify five features of the tent of meeting that infuse it with monumentality: first, its significance in negotiating the patron-client relationship between Yhwh and Israel; second, the collective energy and material resources required to construct it; third, its ingenious design as a mobile shrine; fourth, the manner in which its construction pattern mirrors monumental temple building projects described in royal inscriptions; and fifth, its role in commemorating the imagined time of socio-cultic unity of the Israelites at Sinai. The article concludes by exploring the link between monumentality and centrality, and by examining how the image of the priestly wilderness sanctuary might have reinforced the need for the centralization of collective attention and resources in the Yahwistic cult of the post-monarchic period.
Print
Share
Authors/Editors
Julia Rhyder Born 1987; 2011 BA (University of Melbourne, Australia); 2012 BTheol (Hons) (University of Divinity, Australia); 2018 PhD (University of Lausanne, Switzerland); currently Assistant Professor of Near Eastern Languages and Civilizations at Harvard University, USA.
https://orcid.org/0000-0002-3146-0662