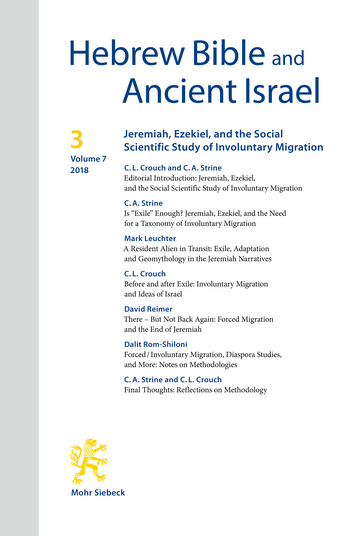 There – But Not Back Again

Forced Migration and the End of Jeremiah

article PDF
DOI: 10.1628/hebai-2018-0021
Commentators have often pondered the puzzle that Jeremiah should be among those who flee to Egypt in Jeremiah 43, while being depicted as committed to remaining in Judah. H.-J. Stipp challenges the common view that Jeremiah was forced to go along with the company who made the choice to flee: rather, the flight was unforced, and Jeremiah's inclusion is a clumsy editorial insertion. This essay seeks to overturn Stipp's case by proposing a more nuanced reading of the narrative, and attending to the evidence from studies of refugees in civil conflicts. It appears rather that the whole company was forced to remove to Egypt – Jeremiah and Baruch among them – by leaders who were themselves vying for power and acting against the interests of the refugees.
Print
Share
Authors/Editors
David J. Reimer No current data available.