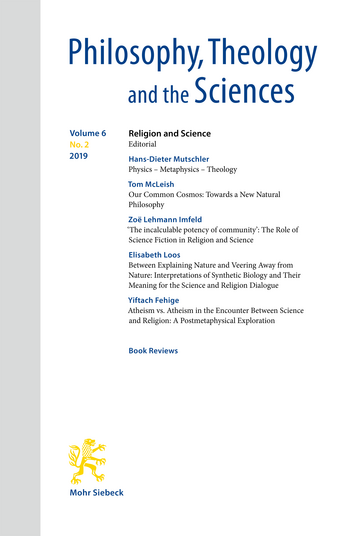 Artikel PDF
DOI: 10.1628/ptsc-2019-0018
The theism-atheism divide continues to dominate discussions on science and religion. This is partly the result of a one-sided focus on the challenges posed by militant atheism to the rationality of religion under the impression of the cognitive powers of modern science. This explorative paper suggests the need for redirecting the attention to the atheism-atheism divide. To this effect the paper examines and contextualizes some of the wealth of atheistic objections to 'militant atheism' in the work of Thomas Nagel, Jürgen Habermas, Philip Kitcher, and John L. Schellenberg. A closer look at these atheistic objections leads ultimately to a discussion of a qualified postmetaphysical philosophy. Such a philosophy seems most suitable today when looking at the richness of the relationship between science and religion. Major support for a qualified postmetaphysical approach is drawn from historical investigations into the emergence of the current notions of 'science' and 'religion,' and this is done in the context of a genealogy of reason in pursuit of the project of a critical enlightenment.
Drucken
Teilen
Personen
Yiftach Fehige Keine aktuellen Daten verfügbar.