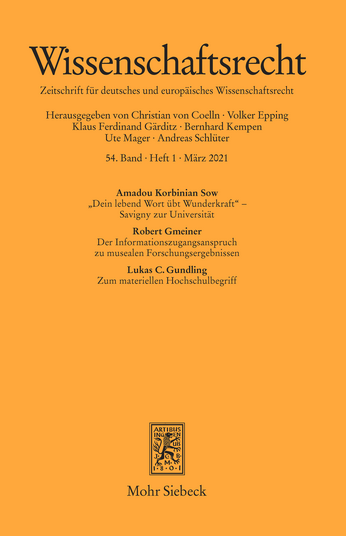 Artikel PDF
DOI: 10.1628/wissr-2021-0002
Savigny was not only a proficient legal scholar and the father of modern German jurisprudence – he also developed a theory of the university. His theory was born from pressure exerted by technological progress in the early 19th‑century, specifically by the advance of the printing press. At the time, the new, disruptive technology seemed to render access to knowledge ubiquitous and posed a serious challenge to the necessity of universities. Savigny answered this challenge by drawing on the charismatic and enthusiastic nature of academic speech as an encounter between teacher and students. It forms the core of his theory of the university – which has so far hardly been studied. His thoughts on the subject are spread over four texts and several remarks in other works, notes, and lectures. In this essay, they are collected and interpreted under the prism of his era and the accompanying challenges of the printing press. Ultimately, a chapter in the history of ideas of the university is written. Additionally, the essay argues that Savigny's approach offers valuable insights in dealing with our present digital disruptions of academia.
Drucken
Teilen
Personen
Amadou Korbinian Sow Keine aktuellen Daten verfügbar.