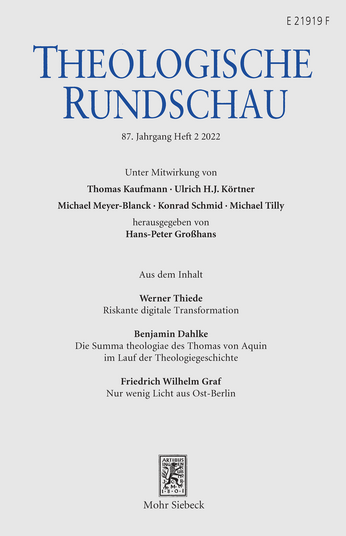 Artikel PDF
DOI: 10.1628/thr-2022-0009
Immediately after the Council of Trent, Thomas Aquinas was granted a special position within Catholic theology as he was regarded both an outstanding and 'orthodox' thinker. Declared a teacher of the Church, his main work, the Summa theologiae, was circulated widely. Commenting on the Summa, thus, became a common way of doing theology. Up until the 20th century Aquinas would maintain his special position, but with Vatican II things changed. This review article, based on two recent collections of essays, displays the changing fate of Aquinas' Summa in the course of history, beginning in the 13th century. As it turns out, not only Catholics but also Protestants have engaged productively, sometimes critically of course, with the medieval friar's thought.