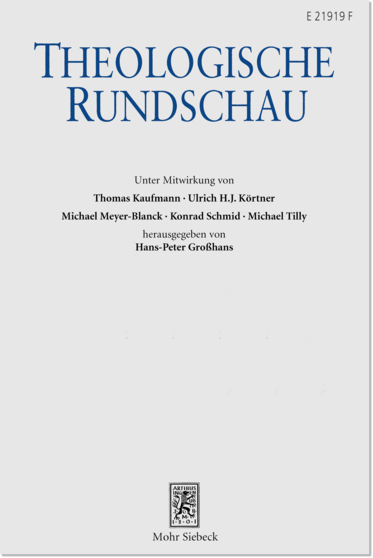 Artikel PDF
DOI: 10.1628/004056917X14896676057478
In Europe, especially in Germany, research in Jewish Studies is done not only by specialists but also in neighboring disciplines such as protestant and catholic theology, history and philosophy. Accordingly, a wide range of books can be stated while publications in the core fields of the Jewish tradition like Jewish law and liturgy are missing. High quality enquiries in rabbinic studies (such as a collection of essays on Bereshit Rabbah) are rare but they exist, possibly because they are seen as allowing for ramifications in Biblical exegesis which is relevant to Christian theology. In number, publications on Jewish philosophy (with a focus on German-Jewish philosophy in the 20th century) are predominant, maybe because this genre is held to be more easily accessible to non-Jewish readers. Next to investigations on Rosenzweig and Hermann Cohen (Bienenstock) and a biography of Martin Buber (Bourel) we find essays on »Jewish philosophy of Religion« (Zank) and on interreligious theology from the Jewish point of view. Special interest is given to publications focusing on Jewish-Christian relations in recent and more di- stant history. The most outstanding book in this review is a collection of essays on a »Synagoga Christiana«, a synagogue construction by a Jewish convert to Christianity, in Greifswald at the beginning of the 18 th century.
Drucken
Teilen
Personen
Matthias Morgenstern Geboren 1959; Studium der Ev. Theologie und der Judaistik; 1995 Promotion; 2000 Habilitation; apl. Professor am Seminar für Religionswissenschaft und Judaistik/Institutum Judaicum der Universität Tübingen, Ev.-Theologische Fakultät.