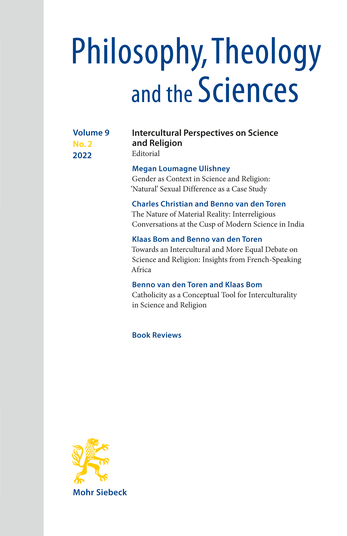 Gender as Context in Science and Religion

Artikel PDF
DOI: 10.1628/ptsc-2022-0014
Recent developments in science and religion highlight the important role played by context in shaping the development of questions, concepts, and practices in the sciences, in diverse religions, and in the study of the relationship between the sciences and religious or theological forms of thought. This essay argues that gender is an important contextual factor that impacts research in both the sciences, theology, and in the field of science and religion. It examines as a case study the example of gender bias in scientific and theological understandings of the 'nature' of sexual difference to argue that gender bias has influenced the development of both questions and conclusions about 'natural' sex differences in the contexts of both scientific and theological research, even, or especially, when those questions and conclusions are cast in neutral, 'objective' terms. It concludes with some reflections on the role of gender in shaping research trajectories in the field of science and religion. Developing greater awareness about the role played by gender as a contextual factor shaping scientific and theological research projects can help to motivate the inclusion of a greater diversity of voices in these areas of research.
Drucken
Teilen
Personen
Megan Loumagne Ulishney Keine aktuellen Daten verfügbar.