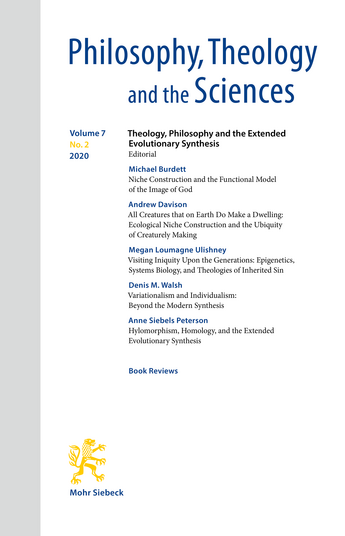 Artikel PDF
DOI: 10.1628/ptsc-2020-0019
The Extended Evolutionary Synthesis (EES), given the significance it places on evolutionary developmental biology, has been associated with Aristotle's hylomorphism. But how deep does this association run? In the context of his biological writings Aristotle zeroes in on two methodological principles alongside his hylomorphic ontology – principles of particular significance for the biological arena. One of these principles denies the Empedoclean claim that the order of explanation is exhausted by the temporal order of development or, in Aristotle's terms, the order of material causes. The second denies the Democritean claim that animals and their parts can be exhaustively explained in terms of static, structural forms – forms are dynamic and active, indeed interacting with the order of material causes. Focusing on the post-Darwinian concept of homology, I argue that the debate between Empedocles, Democritus, and Aristotle on the proper methodology for investigating animal parts is far from obsolete. First, the EES's preferred developmental account of homology was articulated in response to recognizably Empedoclean and Democritean implementations of the prominent alternative historical account of homology. Second, despite key contextual differences, the developmental account is not merely superficially hylomorphic; it embodies the very methodological principles that Aristotle associates with hylomorphism in his own biological writings.
Drucken
Teilen
Personen
Anne Siebels Peterson Keine aktuellen Daten verfügbar.