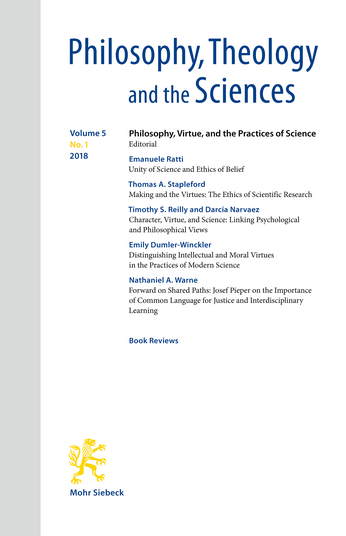 Making and the Virtues

The Ethics of Scientific Research

Artikel PDF
DOI: 10.1628/ptsc-2018-0004
Scientific research, considered in isolation, is often regarded as an amoral activity. In this view, ethics exists only around the margins of research – perhaps in the choice of topics pursued, the treatment of experimental subjects, or the use of results. Such an account seems to explain why brilliant scientists can be deeply flawed, at times even vicious, human beings. It also reflects a distinction between 'making' and 'acting' that found its most influential formulation in Aristotle's distinction between poiesis (making) and praxis (acting). For Aristotle, only the latter can have moral content; the value of the former (making) lies strictly in its ability to achieve a predefined, external end.The making/acting distinction parallels a theoretical division of labor in important strands of 20th century political philosophy of science that sought to isolate an amoral, or at least apolitical, component of scientific research. Once a political community sets the goals and general framework for science (through the praxis of political life), the construction of new knowledge then becomes an apolitical form of making. I argue that while some forms of making (denoted here as fabrication) support such a division between those who define goals and those who carry out the work, other forms of making – including scientific research – do not. In this latter category, what I call design, the 'pure artist' (or 'pure scientist') is necessarily enmeshed in ethical, and indeed political, judgments.
Drucken
Teilen
Personen
Thomas A. Stapleford Keine aktuellen Daten verfügbar.