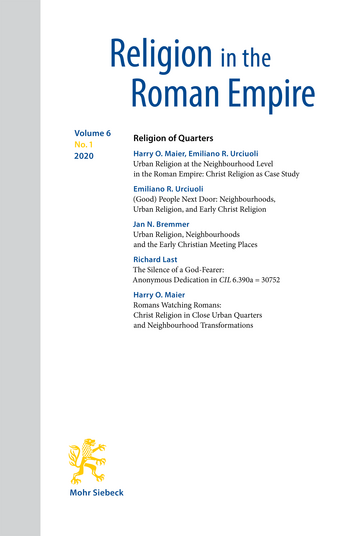 Artikel PDF
DOI: 10.1628/rre-2020-0007
The paper presents an historical urban analysis of the second century Shepherd of Hermas as a text embedded in a densely populated Roman neighbourhood. The paper identifies the organisation of the Rome into vici and their demography. It draws from contemporary urban studies to describe the urban as a site of creative production of culture, networks, and practices. It describes the Shepherd as evidence of such creativity. Hermas is a 'place entrepreneur,' namely a person who theorises urban space and practice which he does through the vivid language of an apocalypse. Hermas addresses a network of Christ following salt merchants living within the confines of a densely populated insula face block neighbourhood. He advises them to communal solidarity even as he is in competition with another space entrepreneur, a visionary prophet whom he pillories as a fortune teller.
Drucken
Teilen
Personen
Harry O. Maier is Professor of New Testament and Early Christian Studies at Vancouver School of Theology.
https://orcid.org/0000-0002-1048-2483